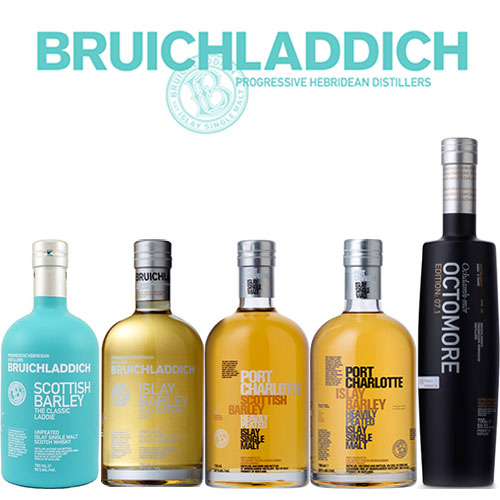 Join us on Friday 20th December as we embark on a taste tour through 6 single malt whiskies from a distillery that has taken the world of whisky to a whole new level, Bruichladdich!

One of two distilleries on the Rhinns of Islay, the western peninsula of the island, Bruichladdich was founded in 1881. Over the past 130 years, the distillery has changed hands many times and had frequent closures, but since 2000 it has been reborn, and is yet again at the forefront of Scottish whisky distilling. In 2000, the distillery was bought by Murray McDavid, and Islay-born Jim McEwan, formerly Bowmore manager, rebuilt and restarted the distillery. Initially mainly producing unpeated whisky, the distillery introduced two extra makes – heavily peated Port Charlotte and the fantastically smoky Octomore. All the hard work finally paid off and in the summer of 2012, the distillery was bought by Remy Cointreau, a French drinks giant.

Your hosts for the evening will be Hervey Magnall owner of The Fisherman’s Retreat and special guest speaker Daniel Whaite from Remy Cointreau’s ‘The Laddie Crew’, our resident piper will herald the start of the evening before the serving of the first dram. To help you through the six Laddie’s on offer we will be serving our famous Sucking Pig dinner with all the trimmings carved by our chefs for all to see.

The evening will conclude with a charity raffle in aid of Bury Hospice, a charity very close to our hearts here at the Fisherman’s.